The previous post talked about the issues with supporting DI in WF4. The nature of Windows Workflow means that there is no true support for DI. Using a custom extension and activity will allow for pulling in dependencies to a workflow while catering for the concerns outlined in the previous post. This series will refer to the dependency injection concept as dependency resolution because this technique is more aligned with the Service Locator pattern than DI.

This first part will go through the design goals of the custom activity.

The custom activity will have the following characteristics:

The biggest sticking point identified for dependency resolution in a workflow activity is how to deal with persistence. Using a DI container as the mechanism for creating the dependency instance means that there can be no guarantee that the instance is serializable. An exception will be thrown by the workflow engine if a workflow contains a reference to an instance that is not serializable when the workflow is persisted.

There are several scenarios that this implementation needs to cater for regarding persistence. 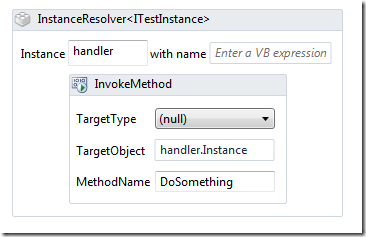 This scenario is reasonably simple. The instance will be resolved when it is referenced. It will be torn down by the DI container (via the extension) when the activity completes. 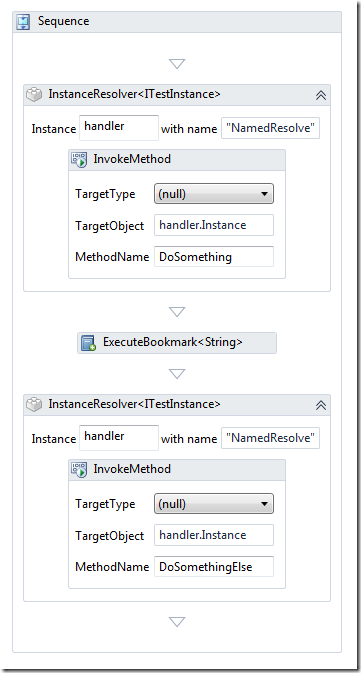 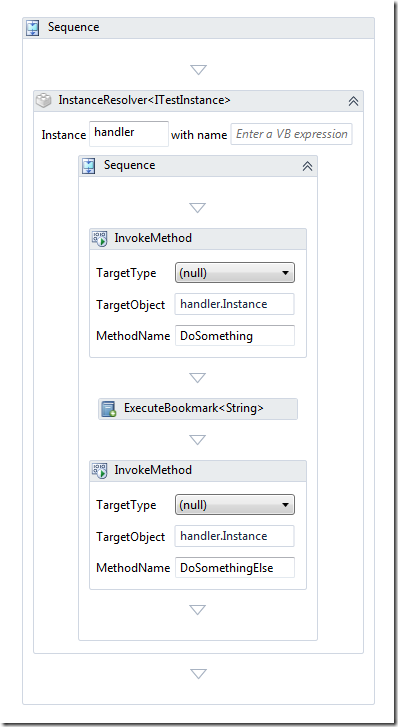 As far as the implementation goes, this scenario is actually the same as the second. When the bookmark is resumed, there needs to be some information stored about the instance resolution so that the instance can be recreated again when it is referenced. This instance is then torn down when the activity completes.

The problems of persistence

The central issue with persistence of a dependency in WF is that the dependency instance may not be serializable. The support for persistence in this custom activity is a design issue more than an implementation issue. You may notice that the InvokeMethod activities in the above screenshots make a reference to an Instance property. This indicates how persistence is supported under the covers.

The next post will go through the implementation of the handler and the extension classes.