I was doing a few things with a local radio station when I was a teenager and I saw a comic in the broadcast room. I was displaying a child being comforted by his mother after finding out what the radio announcer looked like. I never thought about it until then, but it is interesting how we create some kind of mental picture or impression regarding what well known people look like when we have never seen them before.

I am looking forward to meeting Scott Guthrie at TechEd, but do I know what he looks like? Nope, at least not until last night. Here is a photo that I nicked from Nigel Parker’s blog. 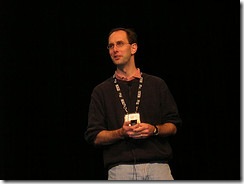 I didn’t really think too much about what Scott would look like, but it’s great to be able to put a face to the blog though.

Oh, and hopefully his prior experience doesn’t happen to me this week. :)